An anagram is a word spelled by rearranging the letters of another word. The “other word” may or may not be a real word; if it is not, we say the letters have been jumbled or scrambled. Note that some “other words” yield more than one anagram. The letters TPSO, for example, can be rearranged to spell OPTS, POST, POTS, SPOT, STOP, and TOPS.

The obvious way to extract an anagram from a jumbled string of letters is to arrange the letters in all possible ways, checking each arrangement against a lexicon (ie, a list of valid words). This brute-force approach can quickly get out of hand, however. The number of ways that three unique letters can be arranged is only 3 times 2 times 1, or 6; but the number of ways that 9 unique letters can be arranged is 362,880. So we need a better way.

The not-so-obvious way to extract an anagram from a jumbled string is to first convert the lexicon into a dictionary where each entry in the dictionary is a sorted word, and the “definition” is the original, unscrambled word. These are the Plain English type definitions we need to describe that:

Our Plain English development system includes a lexicon of the 64,000 most commonly used English words in the form of a text file, one word per line, so we can use that to make our dictionary. These are the Plain English routines that do that:

A random sample of entries from our “anagram dictionary” looks like this:

Note that some of the sorted words (like aeprrss) have more than one “definition” (like parsers and sparser).

Now we can find all the anagrams for a given string simply by sorting the input string and searching for matches in the dictionary. Here are the Plain English routines that do that: 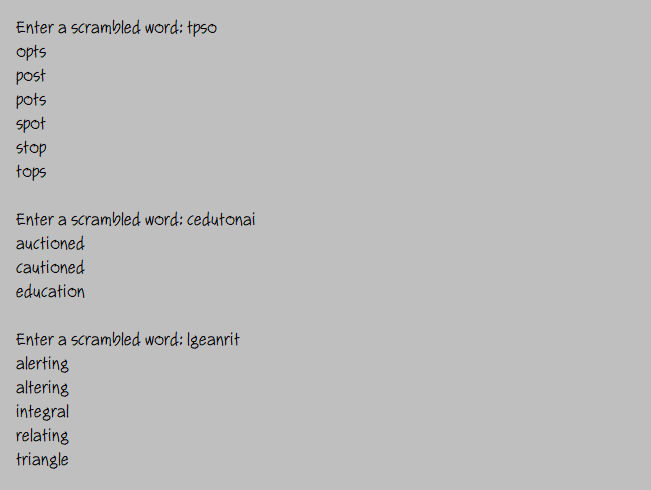 It takes a second or two to create the dictionary, but that only has to be done once, and it can be saved for later use. The unscrambling part is aaeinnnossttu. Whoops! Sorry. I meant to say, “instantaneous.”